Trump Backs Away From Further Military Conflict With Iran

imprisonment for a Syrian Soldier with Syrian regime worked in Syria

Trump Backs Away From Further Military Conflict With Iran

by By Peter Baker

WASHINGTON — President Trump backed away from further military action against Iran on Wednesday and called for a new diplomatic effort as the bristling confrontation of the last six days appeared to ease after Iranian missile strikes that proved more symbolic than deadly.

“Iran appears to be standing down, which is a good thing for all parties concerned and a very good thing for the world,” Mr. Trump said in a televised statement from the Grand Foyer of the White House, flanked by his vice president, cabinet secretaries and senior military officers in their uniforms.

The president vowed again not to let Iran obtain a nuclear weapon and warned it against future terrorism or destabilizing actions in the region, but otherwise avoided the bombastic threats that had characterized his public remarks in recent days. Instead, he said he would impose more economic sanctions on Iran and called on NATO allies to become more involved in the Middle East.

“The fact that we have this great military and equipment, however, does not mean we have to use it,” Mr. Trump said after outlining American combat potential. “We do not want to use it.” He expressed willingness to negotiate with Iran. “The United States is ready to embrace peace with all who seek it,” he said.

He added that Britain, France, Germany, Russia and China should recognize that the nuclear agreement they sealed along with President Barack Obama in 2015 is effectively dead, and called on them to join him in negotiating a replacement that would go further to constrain Iran’s nuclear ambitions.

“They must now break away from the remnants of the Iran deal, or J.C.P.O.A., and we must all work together toward making a deal with Iran that makes the world a safer and more peaceful place,” Mr. Trump said.

His comments came the morning after Iran fired a reported 22 ballistic missiles at two military bases in Iraq that house United States troops in response to last week’s American drone strike that killed Maj. Gen. Qassim Suleimani, commander of Iran’s elite security and intelligence forces. No American or Iraqi troops were injured or killed in the latest attacks, the president said.

In the hours since, some analysts expressed cautious optimism that the missile strikes might prove the end of the immediate conflict rather than the start of a larger confrontation that could spiral into a full-fledged war. They could have been a face-saving way for Iran to say it had responded forcefully to the killing of General Suleimani without actually hurting any Americans, which would quite likely have provoked Mr. Trump into escalating further.

Iran’s foreign minister, Mohammad Javad Zarif, said after the missile strikes that Iran had “concluded proportionate measures” in retribution for General Suleimani’s death, and Mr. Trump’s response seemed to indicate an openness to forgoing any reprisals since there were no casualties.

But analysts cautioned that even if the two sides ease off a military clash in the short term, the conflict could very well play out in other ways in the weeks and months to come. Iran has many proxy groups in the Middle East that could stir trouble in new ways for American troops or American allies like Israel and Saudi Arabia, and experts remained wary of a possible Iranian cyberstrike on domestic facilities.

President Hassan Rouhani of Iran made clear that his country still saw its mission over the long run as driving the United States out of the Middle East after the killing of General Suleimani. “Our final answer to his assassination will be to kick all US forces out of the region,” Mr. Rouhani wrote on Twitter.

Ayatollah Ali Khamenei, the country’s supreme leader, likewise suggested on Wednesday that an incremental operation would not be the end of the clash. “What matters is that the presence of America, which is a source of corruption in this region, should come to an end,” he said in a speech to a hall filled with imams and others, who chanted, “Death to America!” and “Death to Israel!”

The operation against General Suleimani may prove to have consequences beyond the direct relationship with Iran. Outraged that the general was killed after arriving at Baghdad International Airport, Iraq’s Parliament voted to expel the 5,000 American troops from the country. Such a decision would still have to be enacted by the caretaker government, but the Pentagon has begun preparing for the possibility of losing its bases in the country nearly 17 years after the invasion ordered by President George W. Bush.

Mr. Trump’s 10-minute televised statement on Wednesday morning was his most extended effort to explain the situation with Iran to the country after last Thursday’s drone strike on General Suleimani. Aside from a four-minute statement on Friday morning, he has stuck to Twitter blasts, comments to reporters and a call into Rush Limbaugh’s radio show without making an official speech outlining his thinking.

To demonstrate unity, he surrounded himself with his top team, including Vice President Mike Pence, Secretary of State Mike Pompeo, Defense Secretary Mark T. Esper and Gen. Mark A. Milley, the chairman of the Joint Chiefs of Staff, and Robert C. O’Brien, the national security adviser. They all stood stoically around the president without commenting.

The administration’s messages have at times been conflicting and confusing. The president was forced to walk back threats to target Iranian cultural sites after his defense secretary made clear that doing so would be a war crime. The American headquarters in Baghdad had drafted a letter indicating it was withdrawing from Iraq, only to have the Defense Department say it was a draft document with no authority.

And the administration has not given a detailed public explanation of its reasoning for conducting the strike now, given that General Suleimani has been responsible for killing American soldiers and stirring trouble in the region for many years. Officials at times have asserted that the administration was acting to forestall an “imminent” threat and at others have stressed that it was responding to his past actions. 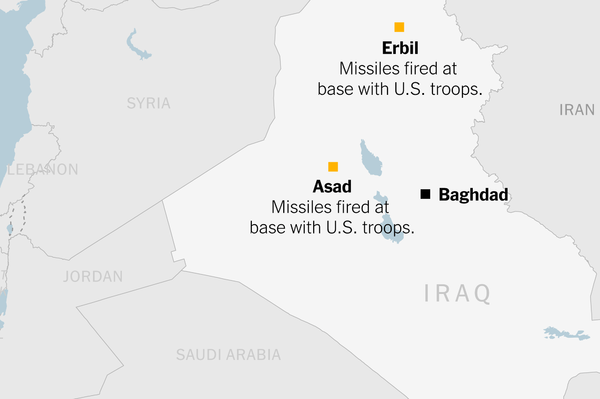 Maps: How the Confrontation Between the U.S. and Iran Escalated

Here’s how the situation developed over the last two weeks.

Congressional Democrats have complained that the administration has not been much more forthcoming in a classified war powers notice or in briefings, raising questions about the nature of the intelligence used to justify the drone strike. Gina Haspel, the C.I.A. director, and other administration officials were scheduled to brief the entire House and Senate on Wednesday.

The White House has said the president acted under his constitutional authority to take action in self-defense as well as in keeping with the power granted by Congress in a 2002 measure that authorized Mr. Bush’s invasion. Speaker Nancy Pelosi has said she would hold a House vote this week on legislation meant to rein in the president’s ability to go to war with Iran, although such a measure presumably would not be accepted by the Republican-controlled Senate, much less signed into law by Mr. Trump.

But some Democrats urged Mr. Trump to pull back from further military escalation anyway. “Both sides need to find offramps to avoid conflict from spiraling further out of control,” said Senator Jeff Merkley of Oregon. “Iran claims it does not seek escalation or war. Now is our chance to let them prove it. President Trump should look at diplomatic options and remember that our greatest strength has never been our military might but our global leadership.”

Even Senator Mitch McConnell of Kentucky, the Republican leader, seemed to nudge Mr. Trump not to ratchet up the conflict further. “As a superpower, we have the capacity to exercise restraint and to respond at a time and place of our choosing if need be,” he said on the floor. “I believe the president wants to avoid conflict or needless loss of life, but is rightly prepared to protect American lives and interests.”

General Suleimani, commander of the elite Quds Force of the Islamic Revolutionary Guards Corps, was the architect of Iran’s efforts to extend its influence throughout the Middle East. He helped direct wars in Iraq, Syria, Lebanon and Yemen as he sought to establish a regional bloc of Shiite power, and he was held responsible by the United States for attacks on American troops in Iraq that killed at least 600 during the height of the Iraq war.

More recently, American officials pointed to General Suleimani as the force behind a Dec. 27 rocket attack on a base in Iraq that killed an American civilian contractor. They said he had traveled the region in recent days as part of preparations for a future attack that could have killed hundreds of Americans; however, they provided scant details and no evidence.

Mr. Trump defended his decision to order the drone strike, calling General Suleimani “the world’s top terrorist” responsible “for some of the absolutely worst atrocities” of recent years.

“In recent days, he was planning new attacks on American targets, but we stopped him,” Mr. Trump said without elaborating. “Suleimani’s hands were drenched in both American and Iranian blood. He should have been terminated long ago.”

Mr. Trump has seen Iran as the main enemy of the United States since taking office, withdrawing from Mr. Obama’s nuclear agreement in 2018 and reimposing sanctions in hopes of crippling its economy. Tehran has vowed to abandon constraints in the Obama agreement and proceed with developing its nuclear capabilities.

The Iranian missile strikes, which began early Wednesday morning local time or late Tuesday in Washington, targeted Al Asad Air Base, long a hub for American military operations in Iraq, and another base in Erbil in northern Iraq, which has been a home for Special Operations forces in the fight against the Islamic State both in Iraq and in Syria.

In the hours afterward, Mr. Trump seemed to indicate that the Iranian missiles did no meaningful damage. “All is well!” he wrote on Twitter. “Missiles launched from Iran at two military bases located in Iraq. Assessment of casualties & damages taking place now. So far, so good!”